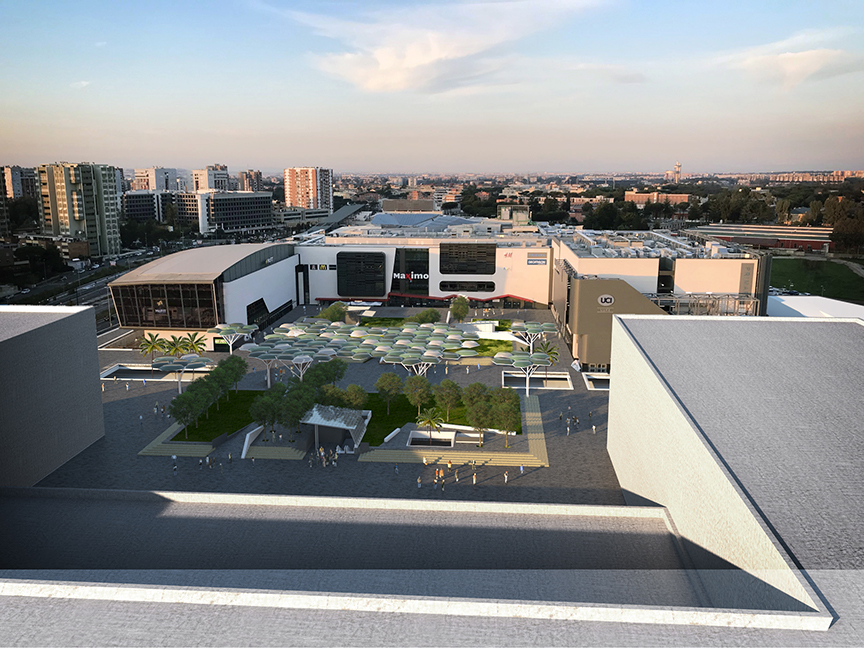 The project consists in the completion of the new public square already partially built and named after the great artist Gabriella Ferri, as part of the “Laurentino” Urban Recovery Program (Private Proposal No. 2) in the area of the XII Municipality of Rome. In the project signed by the Roman studio 3C + t, the large square (with a surface greater than that of Piazza del Popolo) is considered the flagship of the new Maximo commercial structure: it represents an ideal space for events and manifestations of various kinds. The completion of the square will be carried out on the roofing of the private car park for public use currently under construction, relating to the future realization of Section Z4 adjacent to the lot.

The square is bordered on one side by the Shopping Center and on the other side by management buildings, among which the new headquarters of the XII Municipality where all the activities currently scattered throughout the territory will be concentrated; as a whole it will be the focal point of the project and will contribute to making this place an urban level pole suitable for hosting events, exhibitions and concerts.

Once completed, the square will be characterized by two rectangular platforms or podiums raised of about one meter (+47.50) with a main diagonal cut, which ideally joins the two stair-lift cores coming from the underlying public car park and with some oblique openings that identify spaces equipped for resting and a fountain.

Along the perimeter of the two raised areas, partly paved and partly treated as a green “parterre”, runs a perimeter staircase in wood-effect stoneware with the dual purpose of raising the two main areas of the square and serving as informal seating for the users.

In the central area, between the two raised areas, a “tensile structure” with an ETFE coated fiberglass cover will be installed, supported by a painted metal structure, covering a space of about 25 x 55 meters that can be used for exhibition or recreational events.